We’re ending the Spring with a wicked double header at Mighty on back to back weekends.
Two tours land on one night as we receive tech funk titan Meat Katie on tour for his new ‘7 Year Itch’ album. If you missed him ignite the dance floor on NYE at Sea of Dreams, here’s another chance to see one of our favorites in action.
As if that wasn’t enough, we have Calvertron and Figure coming through to tear it up on their Jack Knife Tour. Calvertron has absolutely smashed it at his last 2 appearances here and we welcome Figure to bring it to you as well.
Get $15 discount tickets HERE $20 on the door before 11:00p,, $25 after 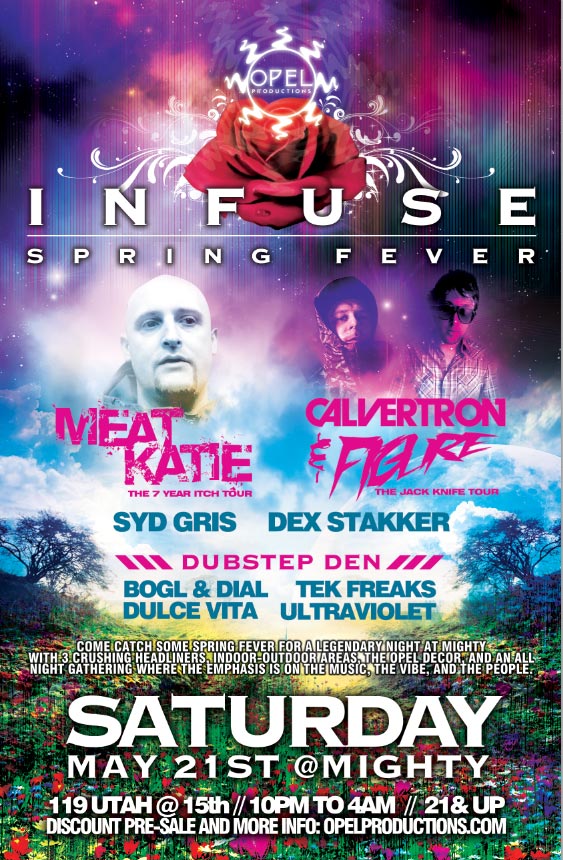 Meat Katie and the 7 Year Itch Release:
In 2004 Lot49 burst onto the music scene and brought with it a sound that incorporates Techno & Electro into Breakbeat & House. Although the label had been championing this sound for some time, it now had solid roots that it could call home. The sound was coined Tech-Funk and although it started off life as a hybrid it soon grabbed the attention of the bigger players within Dance music. Before long scene supremos such as Carl Cox, Laurent Garnier, Armin Van Burren, James Zabiela and many other eclectic Dj’s became key supporters of the label and it’s newly crafted sound.
The 7 year Itch album is a dirty ride through the underground that epitomises this sound with an array of international talent from all 4 corners of the world. 16 brand new exclusive tracks from label artists Dylan Rhymes, Meat Katie, Lee Coombs, Dopamine and Odissi and up and comers Hedflux, Atomic Drop, Chevy One, Maelstrom & more. Showcasing new talent is a huge part of the label ethos so it is not unusual that new and exciting talent such as Disco Bum from Canada and Lightknife from America have been included. All this wrapped up into an exceptional mix of quality you would expect by label boss Meat Katie.
2011 will see Lot 49 continue on its path of breaking new ground and continual bar raising in bringing new and upfront music!

Calvertron
(Twocker, Ministry Of Sound, Trouble & Bass, BugEyed, Household Management, www.myspace.com/calvertronica) — United Kingdom
Following a string of speaker rattling productions and highly acclaimed remixes, Alex Calver aka Calvertron has found himself the subject of attention of some of the most credible artists and record labels in the business. His tracks are consistently featured on the UK